Establishing of OUIAA Belgrade Branch and Novi Sad Communication Base

Almost 20 years have passed since the University of Okayama and the University of Belgrade have first established a cooperative relationship. This time we had the pleasure of organising the formation of the Okayama University International Alumni Association in Belgrade. The following persons have been chosen as the leading members of the newly founded association: academician Gojko Subotic (Serbian Academy of Sciences and Arts) as honorary president, Prof. dr Zivan Lazovic (Faculty of Philosophy) as president (as well as board chairman); academician Caslav Ocic (Serbian Academy of Sciences and Arts), Prof. dr Kayoko Yamasaki, Prof.dr Miodrag Markovic, dr Simona Cupic, dr Dalibor Klickovic and Ms. Petra Pribicevic as members of the executive board.

In order to mark the occasion, two main events have taken place in the following order. On December 17th, foreign exchange students who have returned from Japan gave speeches about the time they spent in Okayama, Niigata, Nagoya and Tokyo respectively, at the University of Belgrade Faculty of Philology, under the title“Little ambassadors ? My experiences in Japan”. On the same occasion, the visiting delegation from Okayama University, including the Okayama University president, Prof. Kiyoshi Morita, the Okayama University International Alumni Association president, Prof. Zhang Hong, as well as Prof. Michitaka Suzuki, all gave speeches about the importance of international cooperation.

On December 18th, the Alumni Association was formally established, with the presence of the Rector of Belgrade University, Prof. Vladimir Bumbasirevic, the Ambassador of Japan to Serbia, Mr. Masafumi Kuroki, and 54 other honoured guests. At present, the Alumni Association has 32 members, and we hope to see an increase in the future, along with the strengthening of cooperative ties of the two universities.

These events concerning the formation of the Alumni Association have attracted the attention of influential media in Serbia. A few appearances in the media deserve special mention. Firstly, one of the leading newspapers“Novosti”has published a short article on the aforementioned events, as well as the interview with Prof. Michitaka Suzuki, noted as the chief link between the universities of Okayama and Belgrade. Secondly, a special news report aired in the main metropolitan region on Serbian national television, regarding the courtesy visit of the Okayama University delegation to the Rector of Belgrade University, Mr. Bumbasirevic. Lastly, in January the following year (2015) as part of a late-night cultural program airing on the“Radio Belgrade 1”national radio broadcasting station, the interviews with Prof. Morita and Prof. Suzuki are in preparation, as well as a talk-show appearance in the show“The Stuff of Dreams”by Dr. Klickovic and Ms. Pribicevic. 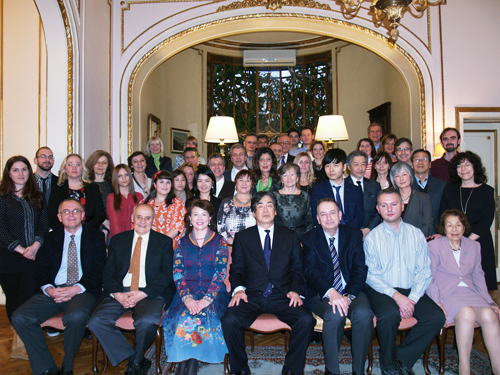